Several other zoological facilities in Canada are also giving the vaccine to animals. 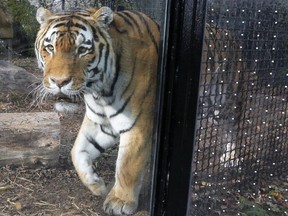 WINNIPEG — The Winnipeg zoo is giving a COVID-19 vaccine to some of its animals that are considered to be at greater risk of contracting the virus.

The Assiniboine Park Zoo says it has begun using a vaccine made uniquely for animals to protect them against the novel coronavirus.

Chris Enright, the zoo’s director of veterinary services, says vaccination is a common and safe way of protecting animals in human care from a variety of illnesses.

The zoo says certain animals are more vulnerable to COVID-19, including primates, big cats such as tigers and snow leopards and those that have closer interaction with human caregivers.

Fifty-five animals are expected to get the shots.

The vaccine is to be administered to the animals in two doses about three weeks apart. It is made by Zoetis, an American company which specializes in animal health. The vaccine’s use is authorized on a case-by-case basis by the Canadian Food Inspection Agency, the zoo said.

Other animals getting the vaccine include white-handed gibbons, squirrel monkeys, camels, goats, llamas, skunks and meerkats.

There has not been a diagnosed case of COVID-19 at the Winnipeg zoo.

There have been cases among animals at other zoos in North America, especially among large cats. Last year, three snow leopards died at the Lincoln Children’s Zoo in Nebraska.