‘Strong doesn’t mean big. Strong is brave and ready to fight for the lives of his citizens and the citizens of the world’ 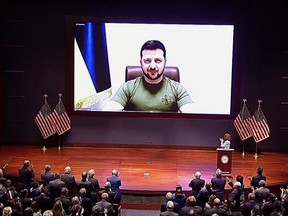 WASHINGTON — Ukrainian President Volodymyr Zelenskyy’s urgent appeal to the U.S. Congress in underway. He is asking for more help in fending off a Russian invasion that has brought death and destruction and sent a wave of refugees fleeing his country.

Zelenskyy’s virtual address to members of the House of Representatives and Senate, scheduled for 9 a.m. EDT (1300 GMT), comes a day after he made a plea to Canada’s parliament for more Western sanctions on Russia and the imposition of a no-fly zone over Ukraine.

A no-fly zone is a step that U.S. President Joe Biden and NATO allies have resisted out of a fear of escalating the war that began with Russia’s Feb. 24 invasion. Biden on Tuesday signed into law US$13.6 billion in emergency aid to Ukraine to help it obtain more weaponry and for humanitarian assistance.

Zelenskyy has sought in recent weeks to shore up support for his country in various speeches to foreign audiences, also including the European Parliament and the British Parliament.

Support for Ukraine is a rare instance in which Republicans and Democrats have aligned in a sharply divided Congress, with some lawmakers in both parties urging Biden to go further in helping Ukraine. There is some bipartisan support in Congress for rushing combat aircraft to Ukraine.

Senate Republican Leader Mitch McConnell on Tuesday told reporters he does not expect Zelenskyy to ask for direct U.S. engagement or for a no-fly zone, which could require NATO forces to fire on Russian aircraft.

“But there are a lot of weapons that are extremely effective at controlling the air,” McConnell said, citing warplanes that Poland has offered to provide Ukraine.

The speech will be broadcast live, unlike a private conversation Zelenskyy held on March 5 with U.S. lawmakers during which he made a plea for aircraft to help Ukraine fend off aerial attacks by Russia.

“We are not asking for much. We are asking for justice, for real support,” Zelenskyy told Canadian lawmakers on Tuesday.

The United Nations estimates that around 3 million people have fled Ukraine, mostly women and children, and are seeking safety in neighbouring countries, mainly Poland.

Biden has announced a ban on Russian oil and other energy imports and has called for a suspension of Russia’s trading status that affords its exported products lower tariffs in the international arena. The House is attempting to pass legislation responding to Biden’s request this week.