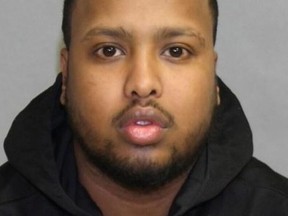 Abilaziz Mohamed is accused of the first-degree murder of Craig MacDonald. Photo by Handout /TPS

One of three GTA men arrested for allegedly sex trafficking an Edmonton teen was pinched in April for the cold-blooded 2021 murder of a Scarborough dad following a Leafs game, the Toronto Sun has learned.

Abilaziz Mohamed, 32, had sat atop the BOLO program as Canada’s most wanted for less than a day when he was arrested in Toronto for the Oct. 13, 2021 slaying of Craig MacDonald in the parking lot of a Boston Pizza.

On Nov. 11, 2021, Yonathan “Yogi” Wolde, 30, of  Toronto, was arrested and charged with a slew of sex trafficking charges, breach of probation, trafficking in cocaine, fentanyl and heroin and assault causing bodily harm.

On Nov. 10, 2021, Kalid Mohamed, 28, of Toronto, was arrested and charged with assault causing bodily harm and two counts of sexual assault.

On Friday, Abilaziz Mohamed, 32, of  Toronto, was arrested. In addition to the charges he faces in MacDonald’s murder, he has been charged with trafficking in persons by exercising control, and assault causing bodily harm.