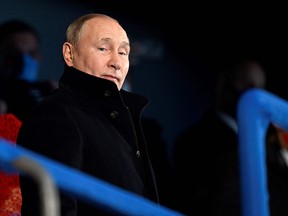 Russia’s President Vladimir Putin looks on during the opening ceremony of the Beijing 2022 Winter Olympic Games, at the National Stadium, in Beijing, on February 4, 2022. Photo by WANG ZHAO /AFP via Getty Images

Europe today sits on the precipice of war. Seventy-seven years after VE Day in 1945, a European dictator is threatening to plunge the continent back into high-intensity, inter-state conflict.

Why? It starts with something Putin told us in a long essay back in July. Put simply, he doesn’t think Ukraine should exist.

He trotted out the same arguments used by Lenin, Stalin, Mussolini and Hitler in the 1920s and 1930s to justify invading dozens of European states.

Now a 21 st century dictator who refuses to accept the dissolution of the Soviet Union is setting out to occupy a neighbouring country of 44 million.

As a mid-ranking KGB officer in Dresden when the Berlin wall fell, he was burning papers as East Germany disappeared. Returning home, he moonlighted as a taxi driver before landing a job at city hall.

As a specialist in subversion, Putin’s natural affinity was with the flourishing local mafia. A notoriously corrupt Kremlin administrator brought him to Moscow.

His presidential campaign was built on the back of deadly apartment bombings in Russian cities, blamed at the time on Chechen separatists. Independent investigations have determined the bombings had been organized by his old KGB comrades.

Whistle-blowers were assassinated, including Aleksandr Litvinenko, poisoned with radiation in London in 2006.