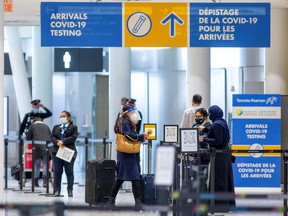 Passengers are pictured after they arrive at Pearson airport. Photo by Carlos Osorio /REUTERS

OTTAWA — Vaccinated travellers will no longer require a negative COVID-19 test to come to Canada as of April 1, according to a source in the federal government.

The source, who is not authorized to speak publicly about the upcoming policy change, said an official announcement is expected later this week.

In February, Health Minister Jean-Yves Duclos announced travellers coming to Canada would be able to present a negative rapid-antigen test at the border as an alternative to a more costly and time-consuming molecular test.

At the time, he said he would consider easing COVID-19 travel restrictions further if the epidemiological situation continued to improve, hospitalizations diminished and Canadians continued to get their booster shots.

He also said the government would move away from stiff restrictions now that Canada has more tools to deal with the pandemic.