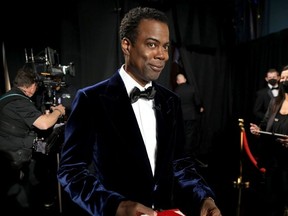 In this handout photo provided by A.M.P.A.S., Chris Rock is seen backstage during the 94th Annual Academy Awards at Dolby Theatre on March 27, 2022 in Hollywood, California. Photo by Handout /A.M.P.A.S. via Getty Images

Chris Rock apologized to Wanda Sykes after being smacked by Will Smith at the Oscars.

The 58-year-old star was hosting the annual awards ceremony alongside fellow comedienne Amy Schumer, 40, and actress Regina Hall on Sunday when Will smacked comedian Chris across the face for making a joke about his wife Jada Pinkett Smith’s shaven head and revealed that Chris apologized to her at an after-party for taking the limelight away from “her night.”

Speaking on ‘The Ellen DeGeneres Show’, she said: “I just felt so awful for my friend Chris. It was sickening. I physically felt ill and I’m still a little traumatized by it. For [the Academy] to let him stay in that room and enjoy the rest of the show and accept his award. I was like, ‘How gross is this?’ This is just the wrong message. You assault somebody, you get escorted out the building and that’s it. But for them to let him continue, I thought it was gross. Plus, I wanted to be able to run out after he won and say, ‘Unfortunately Will couldn’t be here tonight!’”

The ‘Men In Black’ star is currently under investigation by the Academy of Motion Picture Arts and Sciences for his actions – has since issued a public apology to Chris, in which he labelled his behaviour as “unacceptable and inexcusable.”