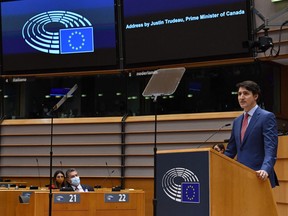 Prime Minister Justin Trudeau talks during a plenary session of the European Parliament at the EU headquarters in Brussels, on March 23, 2022. Photo by JOHN THYS /AFP via Getty Images

It seems Prime Minister Justin Trudeau isn’t welcome by some members of the European Parliament.

During a plenary session of parliament Wednesday in Brussels, several MEPs called Trudeau out, accusing him of violating human rights over the handling of the Freedom Convoy protest in Ottawa last month.

“To defend our rights and the rights of our children, which we have acquired over the centuries, many of us, including myself, are willing to risk, our freedom and our own lives.”

Kolakusic said Canada was once a symbol of the modern world but in recent months has become a “symbol of civil rights violation” under Trudeau’s “quasi-liberal boot.”

“We watched how you trample women with horses, how you block bank accounts of single parents so they can’t even pay their children’s education and medicine, that they can’t pay utilities, mortgages for their homes,” said Kolakusic. “To you, these may be liberal methods, for many citizens of the world, it is a dictatorship of the worst kind.”

How Ottawa psychologists are trying to treat the trauma of racism