EDITORIAL: Canada runs out of arms for Ukraine

EDITORIAL: Canada runs out of arms for Ukraine 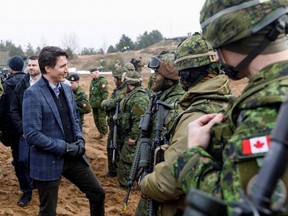 Prime Minister Justin Trudeau talks with soldiers during a visit of the Adazi military base, northeast of Riga, Latvia, on March 8, 2022. Photo by TOMS NORDE /AFP via Getty Images

After running out of weapons to send to Ukraine and underspending its own plan to properly equip the Canadian military by $10 billion over the last four years, the Trudeau government now says it’s looking at increasing military spending – again.

This “Strong, Secure, Engaged” plan was billed as correcting military underfunding by the previous Harper Conservative government by increasing annual spending by 70% to $32.7 billion by 2026-27.

The total additional cost of the program running to 2036-37 was estimated at $553 billion, with $164 billion of that earmarked for capital spending on 348 projects, including everything from new warships to jet fighters.

However, a report by Parliamentary Budget Officer Yves Giroux last week found the Liberals have already delayed $10 billion in capital spending budgeted for the program from 2017-18 to 2020-21.