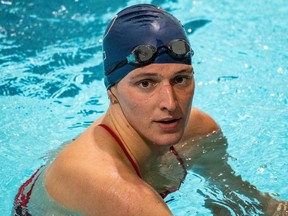 Lia Thomas, a transgender woman, finishes the 200-yard freestyle for the University of Pennsylvania at an Ivy League swim meet against Harvard University in Cambridge, Mass., Jan. 22, 2022. Photo by JOSEPH PREZIOSO /AFP via Getty Images

It’s reignited the debate around fairness in sports when it comes to the participation of transgender athletes.

Jenner is uniquely positioned to comment on the Thomas controversy with authority and also empathy and here’s what she had to say:

“I have been from the beginning out to protect women’s sports. I haven’t been out to protect transgender athletes, but this is not an easy—it’s a tough subject. There’s no one answer that fits everything.”

FATAH: Here's why Trudeau-Singh deal is good for Canadians