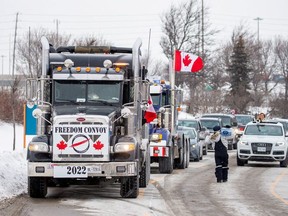 Canadians are currently split on their perspectives of the protests flaring up across the nation. That is to be expected in a democracy such as ours.

What began as a single convoy specifically protesting a trucker vaccine mandate has morphed into a broader movement of diverse voices opposed to different aspects of government COVID-19 rules.

Prime Minister Justin Trudeau, and others, have gone out of their way to amplify the handful of bad actors at the Ottawa protests and paint everyone with the same brush.

Those bad actors certainly deserve condemnation and, if appropriate, criminal charges and arrests.

The residents of Ottawa who live close to the convoy are rightfully upset at the non-stop honking that has made it difficult for them to focus and even sleep. It’s hard to blame them for calling for this to end.

But we shouldn’t lose sight of the forest for the trees — which is the issue of the overbearing COVID-19 rules most Canadians still live under.

The core request of the protesters is that the mandates should be ended. They happen to be right.

We don’t believe the mandates should end because all of a sudden everyone needs to cave to the requests of the protesters.

No, we believe the mandates should end because it’s the right thing to do, and we have called for that to happen in these pages prior to the beginning of the convoys.

Canadian public health officials say it’s time to treat COVID-19 like the flu. We watch as other countries drop all of their restrictions. Saskatchewan is about to do just that. Alberta is set to announce a time to end their vaccine passports. National public opinion supports heading in this direction.