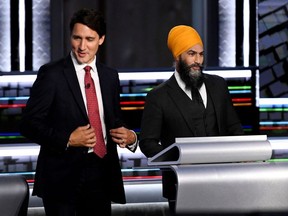 That’s because of a backroom deal called a “confidence and supply agreement” between Prime Minister Justin Trudeau and NDP leader Jagmeet Singh — that both the Liberals and NDP denied was being negotiated, while they were negotiating it.

In return, the Liberals have agreed to a number of expensive promises with no price tags attached, including dental care, pharmacare, more money for subsidized housing and national standards for long-term care homes.

Federally-regulated businesses will be required to give 10 days of paid sick leave to their employees and will be prohibited from hiring replacement workers (“scabs”) during a strike or lock-out.

On the revenue side, the government will phase out subsidies to the fossil fuel sector beginning this year and raise taxes on financial institutions that made “strong profits” during the pandemic.