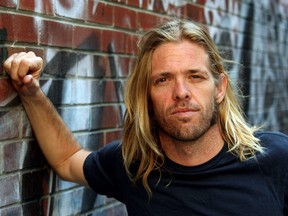 Taylor Hawkins is seen here in Toronto during a promotional stop in 2001. Photo by Craig Robertson /Postmedia Network

Taylor Hawkins, the drummer for Foo Fighters, has died at the age of 50, the band posted in a message to its Instagram page Friday night.

“The Foo Fighters family is devastated by the tragic and untimely loss of our beloved Taylor Hawkins,” read the message. “His musical spirit and infectious laughter will live on with all of us forever.”

No cause of death was given, but on Saturday afternoon, the New York Post reported that journalist Luis Carlos Velez tweeted that “Colombian authorities found: marijuana, antidepressants, opioids and heroin” in his room at the Four Seasons Casa Medina in Bogota.

The band is currently on tour in South America and its last performance was March 20 at Lollapalooza Argentina. They were scheduled to play Friday night in Bogota, Colombia, at the Festival Estereo Picnic.

Tobin is giving back to SickKids, 20 years after his first visit