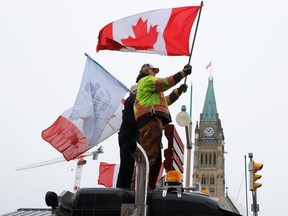 People wave flags on top of a truck in front of Parliament Hill as truckers and their supporters continue to protest against the COVID-19 vaccine mandates in Ottawa, Ontario, Canada, February 6, 2022. Photo by PATRICK DOYLE /REUTERS

Canadian political discourse is becoming much sharper in tone.

Many constituents tell me they feel less comfortable expressing their opinions, and fear reprisal in certain situations if they speak out.

Based on my concerns about political discrimination, I have introduced Bill C-257, an Act to amend the Canadian Human Rights Act (protecting against discrimination based on political belief). This bill would add “political belief and activity” to the list of prohibited grounds of discrimination in the Canadian Human Rights Act, alongside gender, religion, marital status, sexual orientation, and a long list of other characteristics. This bill does not propose to change laws on hate speech — any speech already prohibited by law would remain prohibited.

LILLEY: Canada more than scheduler in chief when it comes to pushing back Putin

LILLEY: Canada more than scheduler in chief when it comes to pushing back Putin