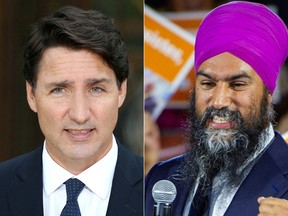 If you can’t stomach the idea of another three years of Justin Trudeau as Canada’s Dear Leader, thank Jagmeet Singh.

You had to know the New Democrats would endorse a deal to keep the Liberals in power and let them operate as if they were a majority government even though in last fall’s election, Justin Trudeau’s party captured the lowest percentage of the popular vote of any government in Canadian history.

The NDP might as well make a non-aggression pact with the Liberals. They’ve been useless at providing any worthwhile opposition, anyway.

For example, the Liberals designated the vote on whether or not to authorize their declaration of the Emergencies Act as a “confidence” measure. Had the motion to invoke a state of emergency failed to pass the House of Commons, the Trudeau government would have fallen and a new election been called.

Since the NDP voted with the government to uphold the Emergencies Act, that means the NDP felt the risk of losing seats in another campaign was more important than safeguarding Canadians’ freedoms against an ineffectual and power-grubbing government.