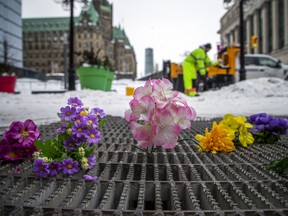 Police from all across Canada were still in Ottawa, along with city workers getting the area around Parliament Hill back to normal, Sunday, February 20, 2022. ASHLEY FRASER, POSTMEDIA Photo by ASHLEY FRASER /POSTMEDIA

Last week, Public Safety Minister Marco Mendicino told the Commons public safety committee that one of the main reasons the Trudeau government had to invoke the Emergencies Act to clear the convoy out of downtown Ottawa was the large number of truckers who were threatening to rape local women.

Both Prime Minister Justin Trudeau and Finance Minister Chrystia Freeland had insisted the convoy was funded by large, foreign organizations who meant to undermine our institutions. Again, no evidence has emerged.

So with their initial arguments crumbling day by day, Mendicino doubled down with the outrageous claim that there were so many potential rapists in the truckers’ midst that the government had no choice but to impose the Emergencies Act.

Keep in mind that large-city Canadian police forces, such as Ottawa’s, deal with sexual assault reports every day, so that even a concentration of assaults in a single neighbourhood would not justify extraordinary government powers.