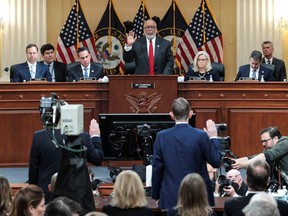 Congress should investigate fully the Jan. 6 riot at the Capitol – and similar recent riots at iconic federal sites. But unfortunately, it never will. Why not?

The current committee is not bipartisan. House Speaker Nancy Pelosi, D-Calif., forbade Republican nominees traditionally selected by the House minority leader to serve on the committee. No speaker had ever before rejected the minority party’s nominees to a select House committee.

In contrast, the Jan. 6 show trial features no dissenting views. Its subtext was right out of the Soviet minister of Internal Affairs Lavrentiy Pavlovich Beria’s credo: “Show me the man and I’ll show you the crime.”

If Trump was not considering a third run for the presidency, would the committee even have existed?

Its slick Hollywood-produced optics demonstrate that the committee has no interest in inconvenient facts. Why did a Capitol officer lethally shoot a petite unarmed woman entering a Capitol window? And why was the officer’s identity and, indeed all information about his record, withheld from the public?