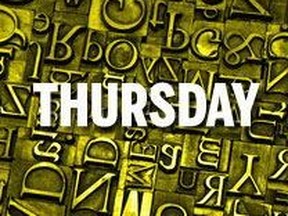 Thursday letters to the editor. Photo by Illustration /TORONTO SUN

FREEDOM AT A PRICE

I’m sorry, but Warren Kinsella’s Feb. 27 column, Who will rise to challenge? was so off the mark regarding Ukraine, except for the part about leadership. If Trump was in power, do you think Putin would be doing this type of invasion? Trump was a lot of things, but being a pushover was not one of them. His unpredictability and resolve were key in keeping his world opponents from this type of mess. Contrary to the media’s and Western politicians’ focus on woke culture and racism and attacking ourselves from within, Russia and China exist on a different plane. Somehow in the West, we forget the price of freedom comes at the cost of at least letting the world know you are prepared for the worst but willing to hope for the best. Nations that give up their energy independence will suffer the consequences in trying times. Let’s start doing what’s right for our country first, like my dad said, “Look after No. 1 first, then you can look after rest.” Kinsella is right when he says we need a real leader, but I feel our definitions are different.

(What is fair to say is there is no world leader — other than Ukrainian President Volodymyr Zelenskyy — who is prepared to be the one to stand up to Putin. The challenge with former president Donald Trump was that he’s unpredictable)

FIGHT FOR OUR LIVES

How a lifetime spent working as a nurse ‘saved her life’