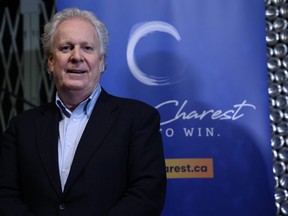 Jean Charest officially announced his candidacy for the leadership of the Conservative Party of Canada in Calgary on Thursday, March 10, 2022. Photo by Gavin Young /Postmedia Network

If Jean Charest is going to win the Conservative leadership, he won’t be doing it by changing long-held positions or pandering to different factions.

In interviews with myself and several other media outlets over the last week, Charest has made it clear that he’s his own man and will stand or fall on that.

Taking apart the child-care deals after they are established and money is flowing to the provinces and parents wouldn’t make sense. Charest’s stand on guns may shock some but actually falls in line with where party voters are.

An Angus Reid Institute poll taken in April 2020, just after the Trudeau government announced their ban on “military-style assault weapons,” found 60% of Conservative voters supported the idea while opposing a handgun ban. Charest is opposed to Trudeau’s idea of a handgun ban, saying the problem is not with law-abiding gun owners but with the border.

On the carbon tax, he doesn’t walk away from his past support for carbon pricing, which Quebec introduced after he left office. But he says it has to be smart, unlike the Trudeau plan.