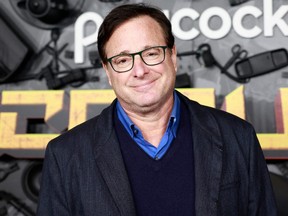 In this file photo taken on Dec. 8, 2021, Bob Saget attends the “MacGruber” screening and premiere at the California Science Center in Los Angeles. Photo by MICHAEL TRAN /AFP via Getty Images

The final hours of Bob Saget’s life has taken yet another mysterious turn.

In new audio obtained by the Sun, Ponte Vedra Concert Hall staffer Rosalie Cocci told police that the comedian, who was found dead on Jan. 9 in his Orlando, Fla., hotel room, said he was suffering “long-term COVID” affects before he took to the stage in Jacksonville.

“He said he had long-term COVID and that it was taking his body a long time to get over it,” Cocci told police. “He said his hearing had been off, and that was the case for that evening, he was asking the sound guys to turn everything up, and that he had been sick the night before. Sick in the sense of his hearing was off, that he had a sore throat, that he was happy he had lozenges. But he also said, ‘You never know how long I’m going to perform. Last night I performed for an hour-and-a-half,’ and I know after the fact that he performed for over two hours at the concert hall from his social media.”

Cocci, who said her job is to run errands for talent playing the venue, said she had very little interaction with Saget and that he “seemed OK.”

“He took that last photograph of himself, the selfie onstage, and he was cracking jokes, (saying), ‘Man, I look good. Damn, I’m good at this.’ He was OK,” Cocci said. “It was very surprising the next day.”

You’ve got questions about the CRA’s principal residence exemption, we’ve got answers

You've got questions about the CRA's principal residence exemption, we've got answers