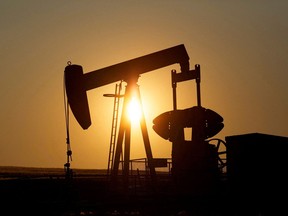 An oil pump jack pumps oil in a field near Calgary on July 21, 2014. Photo by Todd Korol /REUTERS

Vladimir Putin’s brutal invasion of Ukraine has clarified for the world, except those wilfully blind, that green policies weakened Europe and emboldened the ruthless dictator to reclaim territory of the former Soviet Empire.

Here at home, the Liberal government’s obsession with a climate emergency has become so divorced from common sense and deleterious to Canada’s national interests that it urgently needs a fundamental reset which prioritizes adaptation over unachievable and increasingly unaffordable mitigation.

While Canada’s government remains oblivious to reality, an energy crisis awakened Europe to the self-destructive consequences of its environmental policies before Russia’s aggression.

Germany’s colossal strategic blunder is illustrative of the consequences of wishful thinking about renewables. Former Chancellor Angela Merkel decided to get off both nuclear power, after the Fukushima accident, and coal.

Now Germany is desperate to maintain the two-thirds of its gas coming from the Russian Federation and to import coal and may restart domestic coal plants to increase production from 26 to 34 gigawatts, a difference coincidentally equivalent to the elimination of coal usage in Ontario. The result is compromised energy security, dramatically higher energy bills and increased GHG emissions.

Point Roberts: ‘Economic recovery is beyond our reach and no relief is in sight’

Point Roberts: 'Economic recovery is beyond our reach and no relief is in sight'