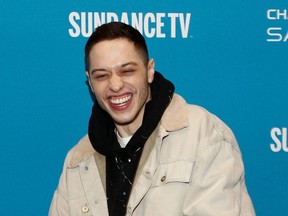 The 28-year-old comedian has been dating the former ‘Keeping Up with the Kardashians’ star, 41, since October following her divorce from rap star Kanye West and the pair reportedly fail to have as much connection when they’re “outside of the bedroom.”

A source close to the couple told heatworld: “Kim went into this claiming that she was going to keep it very casual, but now she’s convinced she’s in love when it’s probably just lust. You can’t blame her, she and Kanye stopped being intimate long before they split up. They were totally out of sync on every level for years, so she feels she’s been starved of affection. Suddenly Pete swoops in and starts giving her more than she can even handle, it’s very intoxicating.”

There’s no doubt he finds her very attractive, but he’s also bragging a lot about the exposure he’s gotten since he started dating her. He’s addicted to the fame and the perks that come from being part of the clan.”