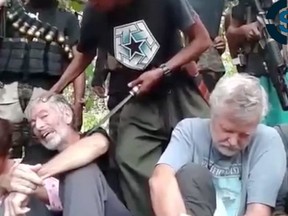 The Abu Sayyaf terrorist group released a video in 2016 demanding more than $100-million for the release of four hostages, including two Canadians, who were kidnapped from a resort in the southern Philippines. The video obtained by the SITE Intelligence Group showed black-clad gunmen standing over Canadians John Ridsdel and Robert Hall, as well Hall’s girlfriend Marites Flor and Norwegian Kjartan Sekkingstad. Photo by Screengrab /SITE Intelligence Group

Almujer Yadah and Bensito Quitino gave themselves up to military officials in Jolo town in southern Sulu province and surrendered their assault rifles, Sulu military commander Maj. Gen. Ignatius Patrimonio and other security officials said. The officials did not provide details of how and when the surrenders were arranged.

Canadian tourists Robert Hall and John Ridsdel were abducted by Abu Sayyaf gunmen from a marina on southern Samal island along with a Norwegian and a Filipino in September 2015 and taken to jungle camps in Sulu.

Hall and Ridsdel were beheaded by the militants months later after the deadline for payment of the ransoms passed. Videos released by the militants showed the victims being brutally killed in front of an Islamic State group-style black flag. The Norwegian and Filipino hostages were eventually freed.

Canadian Prime Minister Justin Trudeau said at the time that he was horrified by the killings and affirmed Canada’s refusal to “pay ransoms for hostages to terrorist groups, as doing so would endanger the lives of more Canadians.” He said Canada was working with the Philippine government “to pursue those responsible for these heinous acts and bring them to justice, however long it takes.”

No need to panic about cooling housing market — crash unlikely