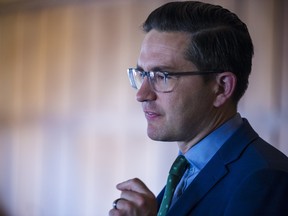 Conservative MP and leadership contestant Pierre Poilievre isn’t mincing words in describing the new NDP-Liberal governing pact. Poilievre is bluntly calling it a coalition government and not only says the NDP is represented at the cabinet table but sits at the head.

“Well, there is an NDP cabinet minister, and his name is Justin Trudeau,” Poilievre said in an exclusive interview with the Sun. “Let’s face it, he is an NDP prime minister. He is so out of touch with the traditional Liberal approach of the Chretien-Martin era.”

Having the government take on that expense at a time when debt and deficit levels are already at record levels would add even greater pressure to the federal books. Poilievre said that the Liberals will eventually hit a brick wall on spending as interest rates rise and the government ends up spending increasing amounts just on the interest payments.

“Right now, if interest rates go up even one percentage point, it’s an extra $12 billion in expense,” Poilievre said.

Poilievre said this agreement is proof that the Liberals have abandoned what he calls “Common Sense Voters.”