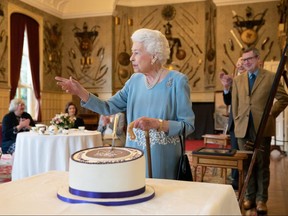 Queen Elizabeth II cuts a cake to celebrate the start of the Platinum Jubilee during a reception in the Ballroom of Sandringham House in King’s Lynn, England, Feb. 5, 2022. Photo by Joe Giddens / WPA Pool /Getty Images

LONDON — Britain’s Queen Elizabeth will miss next week’s Commonwealth Service, Buckingham Palace has said, in what was due to have been the 95-year-old’s first in-person public engagement since being advised to rest by her doctors.

The world’s oldest and longest-reigning monarch has been little seen since she spent a night in hospital last October for an unspecified ailment, and was then instructed by her medical team to rest.

“The queen will continue with other planned engagements, including in person Audiences, in the week ahead.”

The decision was not related to any illness, but because related to discussions about the comfort of getting the queen to and from the service.

Shortly after she celebrated the 70th anniversary of the taking the throne in February, a palace source said she intended to return to normal duties.