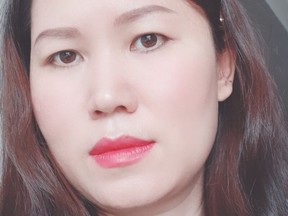 Tien Ly, 46, was found dead in a garbage bag on Eastern Ave. in Toronto on Monday, March 28, 2022. Photo by HANDOUT /TORONTO POLICE

Police have identified a woman whose dismembered body was found in a garbage bag in Toronto’s east end earlier this week.

Toronto Police on Wednesday night said the deceased woman is Tien Ly, 46, of Toronto. Investigators are asking for the public’s help locating her son, 20-year-old Dallas Ly, saying they are concerned about his well-being.

At the scene the following night, police confirmed the victim’s death was deemed a homicide and told reporters there were “obvious signs of trauma to the body, including some dismemberment.”

Police on Tuesday said they were concentrating their investigation on the victim’s “distinctive” nail design and colour. They released images of nails, as well as a long-sleeved shirt the victim was wearing, which featured a red “Armani Exchange” logo.

At the time, police also said they were looking for someone seen in the area pushing a foldable shopping cart filled with “what would appear to be black waste bags.”

How to bet on the WNBA: Moneylines, props, futures and more