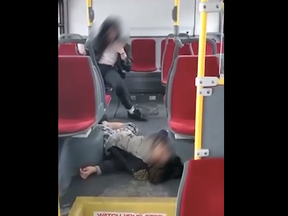 A screengrab of video posted by BlogTO of two girls, ages unknown, intoxicated on a TTC bus. The video was filmed by the driver, the TTC said. Photo by BlogTO /Twitter

A TTC bus driver has been fired for mocking two intoxicated females on his bus and not offering assistance, the transit agency says.

“On Sunday evening, we became aware of a deeply disturbing video showing two customers in distress that appeared to have been filmed by a TTC employee,” spokesperson Stuart Green said. “We immediately launched an internal investigation and identified the person responsible. That person had their employment terminated.