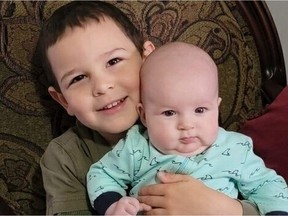 File photo of an amber alert. Photo by RCMP /PNG

B.C. RCMP have issued an Amber Alert for two children — a toddler and an infant — who police suspect have been abducted by their father in Fort St. John.

Four-year-old Liam Ballamy and his 10-month-old sister Myra Ballamy were last seen in the area of 8919 91st Street in Fort St. John on Friday around 11 a.m., according to the Amber Alert, issued shortly after noon on Saturday.

FUREY: Enough with the panic – lifting of mask mandates has gone just fine