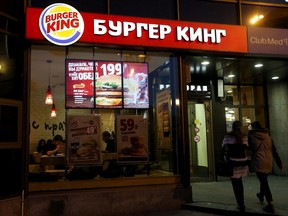 NEW YORK — Burger King’s parent company said on Thursday it has not been able to close its 800 restaurants in Russia because its independent operator there “refused” to do so.

Restaurant Brands International Inc said that to enforce its contracts with the franchisee, Alexander Kolobov, it would need the help of the Russian government, but “we know that will not practically happen anytime soon,” according to a letter to employees from David Shear, president, international, of the company.