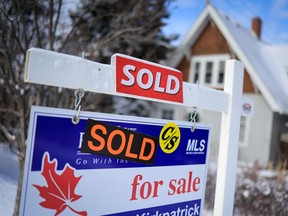 Some 64 per cent of Canadians expect the value of real estate in their neighbourhoods to increase over the next six months. Photo by Gavin Young/Postmedia

Real-estate-addicted Canadians aren’t being scared off by the threat of higher interest rates, polling suggests.

Optimism about the nation’s housing market rose to near record levels last week, despite warnings from central bank and regulatory officials that borrowing costs are poised to increase and could hit the real estate market.

Some 64 per cent of Canadians expect the value of real estate in their neighbourhoods to increase over the next six months, according to the latest weekly survey by Nanos Research Group for Bloomberg News. That’s up from 60 per cent last week, making it one of the fastest 7-day increases in confidence on record.

It’s a surprising result, coming a week after the Bank of Canada warned it plans to start raising lending rates as early as next month. It also suggests the central bank and other officials have a long way to go to quell speculative expectations in the nation’s housing market, which has seen prices surge more than 40 per cent since the start of the pandemic.

Canada is behind only New Zealand in Bloomberg’s global measure of frothy housing markets.

Every week, Nanos Research surveys 250 Canadians for their views on personal finances, job security and their outlook for both the economy and real estate prices. The results are compiled from a rolling four-week average of about 1,000 responses.

The question on housing prices has moved above 64 per cent only once, when it hit multiple weekly records in April last year. The historical average is about 40 per cent. Only 5.6 per cent of respondents said they expect prices to fall, also one of the lowest on record.

At its last policy decision on Jan. 26, the Bank of Canada held interest rates steady but said it would be raising borrowing costs soon to cool inflation — prompting the nation’s bank regulator to warn that some markets could face a correction.

EquityNet can be a game changing private equity investing tool

EquityNet can be a game changing private equity investing tool