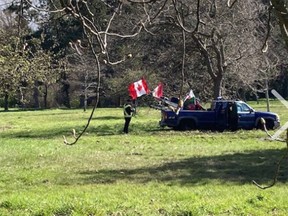 A truck got stuck in the mud off Camas Circle in Beacon Hill Park on Saturday while trying to circumvent police attempts to keep non-local traffic out of the legislature precinct. Photo by Victoria Times Colonist /MARGO GOODHAND

Police checkpoints intended to keep non-local traffic out of the legislature area continued on Monday, as a driver whose truck got stuck in the mud while cutting across Beacon Hill Park was hit with $600 in fines.

The pickup, festooned with Canadian flags and carrying a snowmobile in the back, pulled up to a police checkpoint at Dallas Road and Cook Street — one of several designed to control entry into the legislature precinct and James Bay — on Saturday and the driver was told by an officer he couldn’t drive through.

It turns out the driver had received a notice in Victoria the previous week of an unspecified defect on the truck. Since it hadn’t been fixed yet, the driver received $600 in fines, while his licence plates were seized and the vehicle was towed and impounded.

As for the snowmobile, it was “not great for navigating Beacon Hill Park,” he said. “Not a lot of snowmobiling there.”

Osoko said there were traffic delays of up to 45 minutes on Saturday around the checkpoints, which remained in effect Sunday and Monday, but people were “really patient.” Besides Dallas and Cook, there were checkpoints at Douglas and Belleville streets, Douglas and Superior streets and Wharf and Government streets.