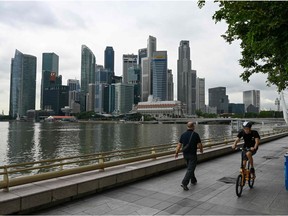 In Singapore, they don’t fool around on housing.

While Canadian housing prices are shooting into the stratosphere largely due to an unprecedented surge by investors, Ottawa has done little to ease the destructive trend.

In Singapore, politicians are combating price jumps with dramatic taxes aimed at curbing speculation by both local and global investors, the latter made up mostly of people from China, the U.S. and India.

Foreign buyers who want to enter Singapore’s hot market are now taxed a solid 30 per cent on any purchase whatsoever.

While some Singapore realtors worry the anti-investor taxes will discourage luxury buyers, political leaders forge ahead. They have said they can’t build new housing supply fast enough to temper price jumps of nine per cent in the past year.

Yet Singapore’s hikes are mild compared to Canada, where average prices have risen about 20 cent in a year. Investors now make up the largest group of buyers in some of Canada’s major markets. They’re going wild to take advantage of Ottawa’s monetary stimulus and extremely low interest rates.

The number of investors in Canadian housing is staggering.