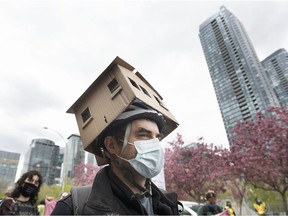 Although there are exceptions, most of the discouraged Canadians priced out of home ownership are barely raising a squeak. Photo by Graham Hughes /The Canadian Press

Young, educated, urban Canadians have a great deal to be angry about with Ottawa for the ways it has worsened the housing crisis.

Prime Minister Justin Trudeau has three times campaigned, with apparent earnest emotion, on promises to provide affordable housing. And each time, he has reneged.

For some reason, young adults in Canada’s big cities, especially women, keep casting a high proportion of ballots for the Liberals, who last year virtually swept the 79 ridings of Greater Toronto and Metro Vancouver. They even helped elect wheeler-dealer Taleeb Noormohamed in Vancouver-Granville, after he had become notorious for flipping 21 properties for a profit of $5 million.

Apparently swayed by Trudeau’s egalitarian rhetoric, centre-left urban voters keep voting for him. That is despite an Angus Reid Institute poll showing four of five Metro Vancouver residents who don’t own a home feel it is important to do so — and 64 per cent acknowledge it is highly unlikely they ever will.

Why do they consistently buy into the posturing? Some city dwellers may think the NDP, or the often-made-fun-of Conservatives, will not do any better to protect their interests. So discouragement, if not despair, might help explain the lack of activism.