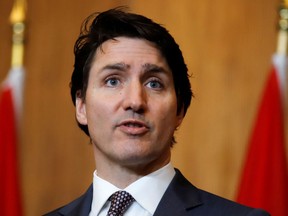 During his speech to the European parliament in Brussels on Wednesday, Trudeau called for aid to Ukraine and brought up the protests over vaccine mandates that took over downtown Ottawa for three weeks earlier in the year.

However, he said Canada has gone from being a symbol of the modern world to a “symbol of civil rights violation” while under Trudeau’s “quasi-liberal boot.”

He continued: “We watched how you trample women with horses, how you block bank accounts of single parents so they can’t even pay their children’s education and medicine, that they can’t pay utilities, mortgages for their homes,” said Kolakusic. “To you, these may be liberal methods, for many citizens of the world, it is a dictatorship of the worst kind.”

Kolakusic ended his speech with a warning that citizens of the world ​​“can stop a regime that wants to destroy the freedom of citizens, either by bombs or harmful pharmaceutical products.”