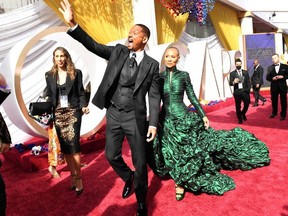 Will Smith and Jada Pinkett Smith attend the 94th Oscars at the Dolby Theatre in Hollywood, Calif., on March 27, 2022. Photo by VALERIE MACON /AFP via Getty Images

“This is a season for healing and I’m for it,” the Girls Trip star shared to her Pinkett Smith has been open about her battle with alopecia, which causes hair loss and balding. But according to a TMZ report, Rock didn’t know she suffered from the autoimmune disorder when he made the remark, which wasn’t scripted.

Cameras flashed on Smith, 53, smiling from his seat at Rock’s dig while Pinkett Smith, 50, rolled her eyes and looked visibly unimpressed.