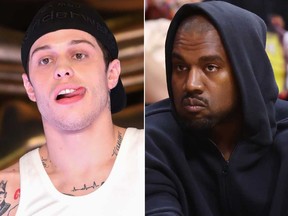 Pete Davidson urged Kanye West to “grow the f*** up” in a leaked text exchange.

The Saturday Night Live star hasn’t responded publicly to any of the Stronger hitmaker’s public attacks on him or his girlfriend, the 41-year-old rapper’s ex-wife Kim Kardashian, but his friend Dave Sirus has seemingly shared a string of messages between the two men in a now-deleted Instagram post.

Pete responded with a selfie saying: “In bed with your wife.”

He later suggested he and Kanye – who has North, eight, Saint, six, Chicago, four, and two-year-old Psalm with Kim – should meet face to face.

He wrote: “I’m in LA for the day if you wanna stop being a little internet b**** boy and talk.”

Will Smith: There’s no infidelity in my marriage

Will Smith: There's no infidelity in my marriage