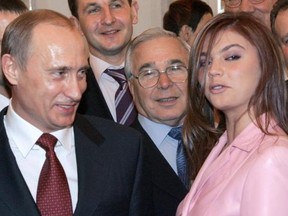 Vladimir Putin’s mistress Alina Kabaeva, 38, and their four children have escaped to Switzerland, according to the New York Post’s Page Six.

“While Putin carries out his assault on the Ukraine, attacking innocent citizens and causing a refugee crisis, his family is holed up in a very private and very secure chalet somewhere in Switzerland — for now, at least,” a source told Page Six.

On Feb. 28, the Swiss Federal Council announced that it froze assets of a list of Russian individuals and companies, noting that “the financial sanctions against Russian President Vladimir Putin, are also to be implemented with immediate effect.”

Putin, who never speaks about his private life, has two other adult daughters, the Leningrad-born Maria, 36, and the German-born Katerina, 35, from his first marriage to former flight attendant Lyudmila Shkrebneva. He divorced her in 2013.

It was recently reported that Putin’s ex-wife and their children were in an “underground city” in Siberia.

‘No simple solution’ to gas prices; B.C. has no tax reduction plans: Farnworth

'No simple solution' to gas prices; B.C. has no tax reduction plans: Farnworth