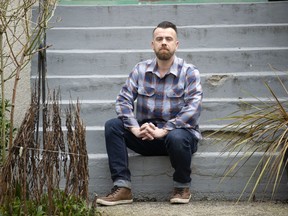 Justin Grant, pictured in Vancouver on Feb. 17, 2022, says he was fired from his job at Independent Grocers for helping homeless people in the area. The store has filed a response to Grant’s lawsuit claiming that there was just cause for the termination. Photo by Mike Bell /PNG

A Vancouver grocery store is defending its decision to fire a manager who alleges he was wrongfully dismissed for helping feed the homeless.

Justin Grant filed a lawsuit in B.C. Supreme Court that levelled the allegations against the Your Independent Grocer franchise on Davie Street, where he’d been employed for nearly four years as a manager before being terminated in October.

He says that he was “absolutely devastated” when he was summoned to a meeting in October with no advanced notice of what was going to be discussed, accused of theft and terminated.

But the store has filed a response to the lawsuit claiming that there was just cause for the termination.

The store says that as an employee, Grant was subject to a theft and employee purchase policy whose primary purpose was to prevent internal theft and merchandise theft.