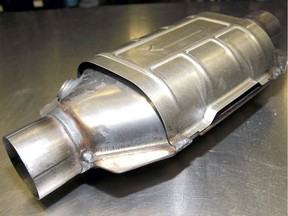 A change made to the province’s rules on dealing in and recycling metal now requires dealers to report each transaction involving a catalytic converter, including information about the seller, to police on the same day the sale was made.

The metals in catalytic converters were not previously listed as regulated metals under the act, leaving a loophole that had been exploited in recent years.

Scrap dealers can pay up to $1,000 for a catalytic converter, which contains just a gram or two of rhodium, one of earth’s most precious metals.