FIRST READING: Ottawa’s pointless odyssey to replace the F-35 with the F-35

FIRST READING: Ottawa’s pointless odyssey to replace the F-35 with the F-35 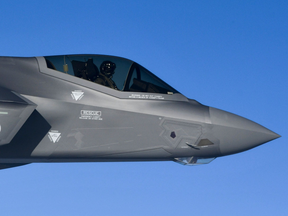 The year is 2010. The iPad has not yet made its storied debut, the terrorist group ISIS is still years away from its ignominious rise, and the Canadian federal government has just announced plans to replace its aging fleet of CF-18 fighters with 65 Lockheed Martin F-35s costing $9 billion. If all goes according to schedule, the first Canadian F-35s will be in the sky by 2016.

Supporters of the Liberal approach note that while it yielded the exact same plane in the end, they at least had a shot at trying out the alternatives (which in this case were mainly the Saab Gripen and the Boeing Super Hornet). There are also claims that the Liberals managed to get the planes at a better price (although that part is still up in the air).

Nevertheless, it came at the expense of another 10 years of flying the CF-18, whose service in the Canadian Armed Forces celebrates its 40th birthday next year. For context, when that fighter first flew for Canada, the current chief of the defence staff, Wayne Eyre, was just 16 years old. Notably, the plane is so old that Canada had to patch up the fleet by buying a bunch of used Australian cast-offs in 2019.