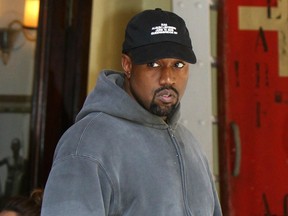 Kanye West’s planned performance at the Grammys has reportedly been scrapped.

The ‘Jesus Walks’ rapper is no longer due to appear at the music awards ceremony on April 3, due to his “concerning online behaviour”, an insider told The Blast.

“You may not feel sorry for Kim because she’s rich and famous, because she appropriates Black culture … but what she’s going through is terrifying to watch and shines a spotlight on what so many women go through when they choose to leave.”

The ‘Stronger’ rapper had also been hurling abuse towards his former spouse’s boyfriend, Pete Davidson, on the app.

A Meta spokesperson told TMZ that the 44-year-old star will not be allowed to post, comment, or send direct messages – and more – on the app

GOLDSTEIN: Canada -- The Great Convenor of the Great Reset