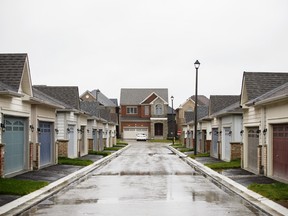 Mortgage holders are keeping a keen eye on the path of rate hikes and what they mean for growing monthly costs. Photo by Cole Burston/Bloomberg

When the Bank of Canada raised its benchmark interest a quarter point to 0.5 per cent in early March, it made clear that more increases were on the way.

“The economy is now in a place where moving to a more normal setting for interest rates is appropriate,” Tiff Macklem, the central bank’s governor, said in a speech.

Mortgage broker Ratehub.ca crunched some numbers following the Bank of Canada’s announcement. Ratehub’s model was based on a homeowner who had put a 10-per-cent down payment on a $700,000 home, and had chosen a five-year, variable-rate mortgage with a starting rate of 0.9 per cent, amortized over 25 years.

Residential mortgages from the Bank of China (Canada) rise more in Ontario than in B.C.